The Thrill of the First Sentence 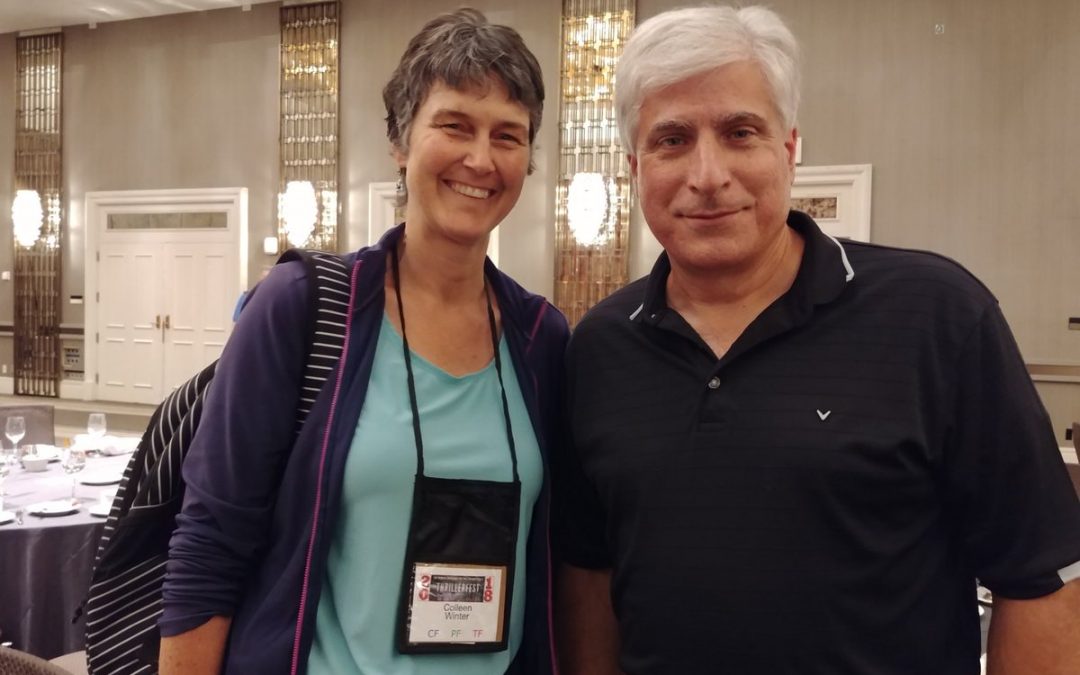 How To Write a Winning “Hook”

Do you slave over your story’s opening sentence? Good! That’s what successful writers do: write it, revise it, and tweak it until they’re sure it will fire the reader’s desire to know what comes next. A first sentence must be a “hook.”

Colleen Winter knows this well. In July she attended ThrillerFest in New York, the annual international conference for thriller writers, and entered their Best First Sentence Contest in which 11 guest authors chose their favorite sentences from thousands of submissions. Superstar author Steve Berry chose Colleen’s. (That’s the two of them in the photo above.) Here’s her winning sentence: “My father married me when I was twelve.”

“The ability to bring a sentence (and a story!) down to its essentials was something I honed in one of Barbara Kyle’s master classes and from her evaluation of an earlier manuscript. Barbara’s input and expertise have been invaluable in getting me to where I am today.” – Colleen Winter

Here are some foolproof ways to wield a hook.

1. Name a character. The first sentence of Herman Melville’s Moby-Dick is: “Call me Ishmael.” It’s famous, and for good reason. Names have power, because they conjure up a living, breathing person.

2. Raise a question in the reader’s mind. Toni Morrison starts her novel Paradise with these six arresting words: “They shoot the white girl first.” The reader’s mind lurches to ask: Who are “they”? Who’s the girl? Why shoot her?

4. Plunge straight into the plot. My thriller Beyond Recall, published under my pen name Stephen Kyle, begins with: “The deadline was up. She would have to kill.” Okay, that’s two sentences but they make the point. (And that book was a big success – over 100,000 copies sold – and was a Literary Guild Selection.)

5. Show a character’s personality quirk. The opening of Vladimir Nabokov’s ground-breaking Lolita tosses a small bombshell of Humbert Humbert’s quirkiness: “Lolita, light of my life, fire of my loins.”

6. Show a character’s attitude. In J. D. Salinger’s The Catcher in the Rye, teenage narrator Holden Caulfield’s cocky attitude is on full display in the first sentence: “If you really want to hear about it, the first thing you’ll probably want to know is where I was born, and what my lousy childhood was like, and how my parents were occupied and all before they had me, and all that David Copperfield kind of crap, but I don’t feel like going into it, if you want to know the truth.”

7. Render a mysterious or suspenseful event. George Orwell’s novel Nineteen Eighty-Four starts with: “It was a bright cold day in April and the clocks were striking thirteen.”

Use any of these techniques and you’ll have your readers happily hooked.

Learn more about hooks and dozens of other aspects of writing a successful novel in my book Page-Turner.