The Exciting Leap from Book to TV Series

When you’re writing a story, do you dream of seeing it one day made into a film? I certainly do.

So I’m thrilled to let you know that the dream may soon be a reality! It’s happening with my novel Entrapped.

Working with my creative partners –- Stephen Best, with whom I wrote the screenplay for the feature film Saving Dinah; and Peter Szabo, founder of Possibility Films –- we’re developing Entrapped as a four-part television drama. I couldn’t be happier!

My “first life,” as I call it, was on screens and stages; I enjoyed a twenty-year acting career in film, television, and theater. So now, writing the scripts for the Entrapped series, it feels wonderful to return to my TV roots. 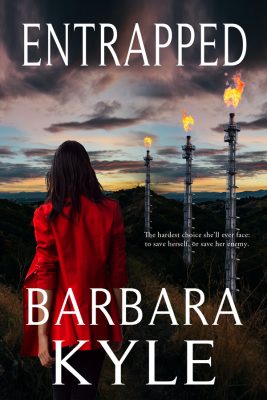 Entrapped is a novel of suspense. Here’s a little about it:

When Liv Gardner arrives in the rural town of Spirit Creek, Alberta, she has nothing but her old car and a temporary job as paralegal with the local attorney. But Liv’s down-market persona is a ruse. She is actually in-house counsel of Falcon Oil, a small oil and gas company she co-owns with her fiancé, CEO Mickey Havelock – and they are just weeks away from financial ruin.

Farmer Tom Wainwright, convinced that Falcon’s lethal “sour” gas killed his wife, is sabotaging their rigs. But Wainwright is clever at hiding his tracks and the police have no evidence to charge him. With the sabotage forcing Falcon toward bankruptcy, Liv has come undercover to befriend Wainwright – and entrap him.

But Liv never dreamed she’d become torn between saving the company she and Mickey built and her feelings for the very man whose sabotage is ruining them.

On a rain-swept night, Spirit Creek is stunned when one of their own is murdered. The evidence does more than point to Tom Wainwright . . . it shatters Liv’s world.

The television series of Entrapped is in development, which takes quite some time, so I’ll keep you posted about the process.

But right now I invite you to enjoy Entrapped, the novel. It’s available from Amazon. I’d love to hear what you think of this story!