Here’s a little about me. Before becoming an author, I trained at the National Theatre School of Canada and went on to enjoy a twenty-year acting career playing diverse characters from Shakespearean heroines on stage to starring roles in daytime TV dramas and Disney made-for-TV movies.

It felt like a natural extension of my acting to create characters for fiction. My seven-book “Thornleigh Saga” series is set in 16th-century England and follows a middle-class family’s rise through three generations and three tumultuous Tudor reigns.

My acclaimed thrillers include three written under my penname Stephen Kyle.

Over half a million copies of my novels have been sold world-wide.

My new novel of suspense is THE MAN FROM SPIRIT CREEK. I hope you’ll love it!

My husband and I live in Guelph, a university city in southern Ontario where we enjoy its riverside walks, vibrant arts community, and good-neighborliness. 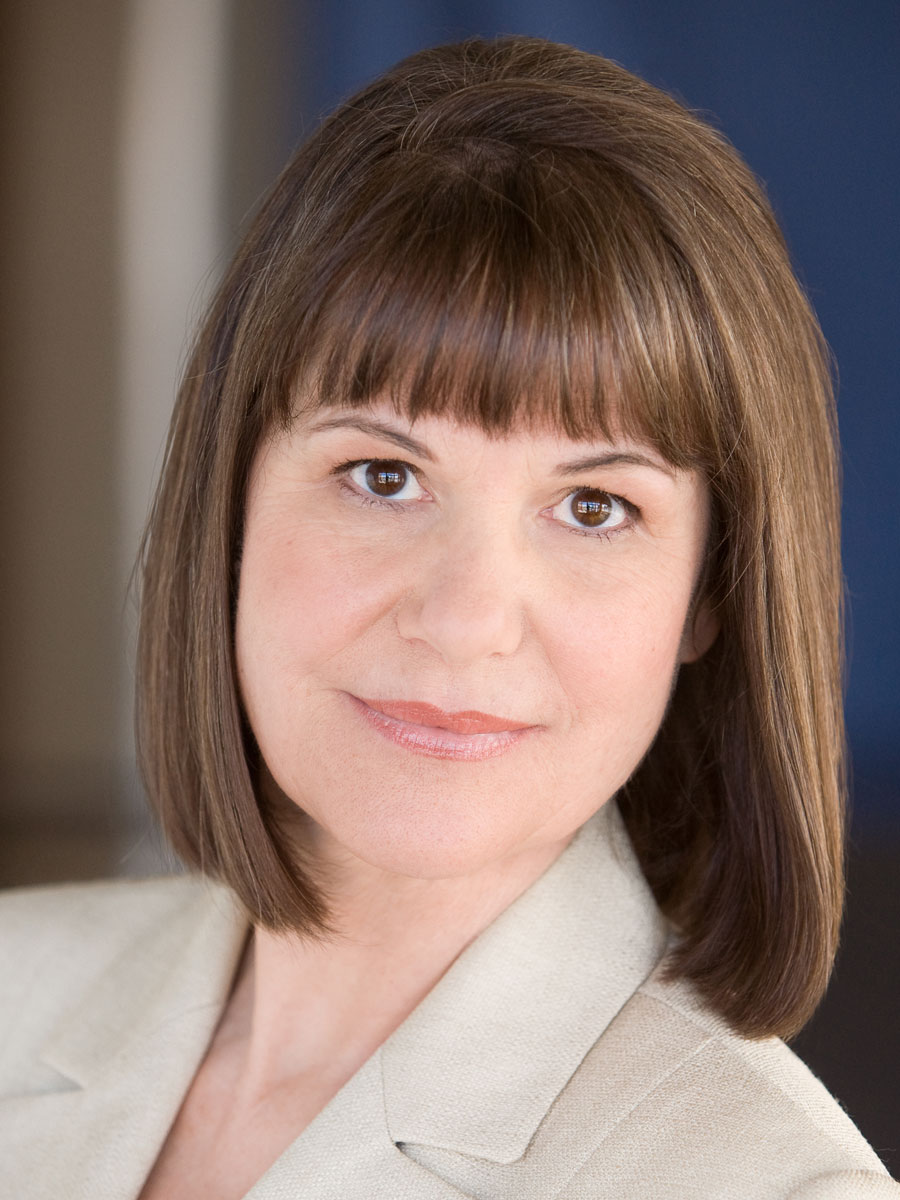 “A haunting thriller…Kyle keeps the cinematic action scenes and nail-biting suspense rolling throughout.”

– Publishers Weekly on The Experiment

– USA Today on The Queen’s Exiles

“A heart-stopping thriller…Kyle is a master at her craft.”

I’m delighted to announce the release of THE MAN FROM SPIRIT CREEK, previously published as “Entrapped” and now with a beautiful new look. Enjoy this close-to-home novel of suspense! Available in paperback and e-book – and, NEW! – audiobook. The audiobook is FREE with a 30-day trial! 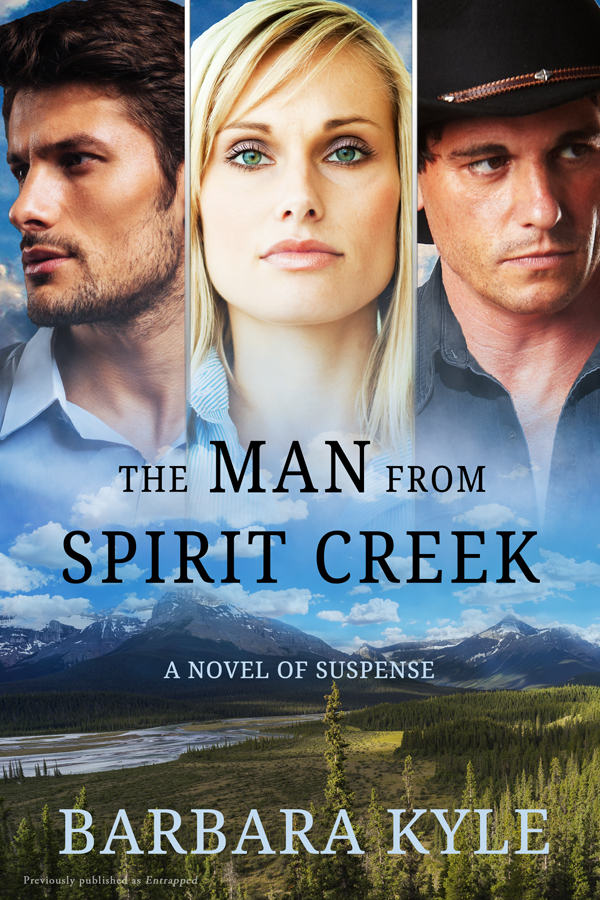 “A stunning thriller. Lost sleep as I couldn’t put this one down.” – Amazon review

When Liv Gardner arrives in the rural town of Spirit Creek, Alberta, she has nothing but her old car and a temporary job as paralegal with the local attorney. But Liv’s down-market persona is a ruse. She is actually in-house counsel of Falcon Oil, a small oil and gas company she co-owns with her fiancé, CEO Mickey Havelock – and they are facing financial ruin.

Their assets are concentrated around Spirit Creek where farmer Tom Wainwright, convinced that lethal “sour” gas killed his wife, is sabotaging Falcon’s rigs. But Wainwright is clever at hiding his tracks and the police have no evidence to charge him. With the sabotage forcing Falcon toward bankruptcy, Liv has come undercover to befriend Wainwright – and entrap him.

But Liv never dreamed she’d become torn between saving the company she and Mickey built and her feelings for the very man whose sabotage is ruining them.

On a rain-swept night, Spirit Creek is stunned when one of their own is murdered. The evidence does more than point to Tom Wainwright . . . it shatters Liv’s world.

“Impossible to put down. Liv arrives in Spirit Creek as an undercover oil executive. . . then risks all she has to make sure the wrong man is not found guilty of murder.” – BookSirens

“A page turner that will have you wishing you didn’t have to put it down for your real life.” – Goodreads

“Full of twists that kept me wanting more. . . a mix of thriller, romance, and redemption.” – BookSirens 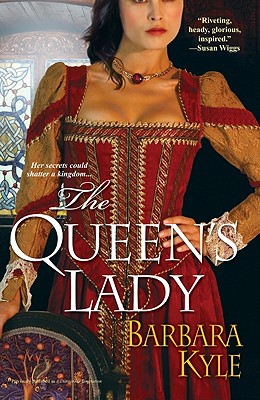 “Compelling … comparable with the likes of Margaret George.” – Publishers Weekly

Set in the nerve-jangled court of King Henry VIII during his battle with the Catholic church for a divorce, THE QUEEN’S LADY is the story of Honor Larke, a ward of King Henry’s chancellor, Sir Thomas More, and a lady-in-waiting to Henry’s first wife, Queen Catherine of Aragon. Forced to take sides in the religious extremism of the day, Honor fights to save the church’s victims from death at the stake, enlisting Richard Thornleigh, a rogue sea captain, in her missions of mercy, and finally risking her life to try to save Sir Thomas from the wrath of the king. 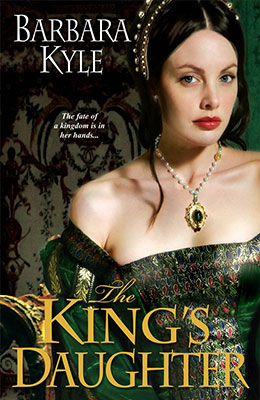 When Henry VIII’s bitter daughter, Queen Mary, launches her reign with a vow to annihilate heretics, young Isabel Thornleigh must act quickly to save her family. Determined to rescue her father from prison, she entrusts her mission, and herself, to a ruthless mercenary. But Isabel is also pledged to spy for the rebel leader whose men are bent on overthrowing the Queen. Caught up in a dangerous maelstrom of intrigue and shifting loyalties, unsure of who is friend and who is foe, Isabel knows only that she must unmask the mysterious traitor bent on destroying her family.

“An exciting tale of the intrigue and political maneuvering in the Tudor court.” – Booklist

England, 1554. In the wake of the failed Wyatt Rebellion, a vengeful Queen Mary has ordered all conspirators captured and executed. Among the imprisoned is her own sister, twenty-year-old Princess Elizabeth. Though she protests her innocence, Elizabeth’s brave stand only angers Mary more. Elizabeth longs to gain her liberty – and her sister’s crown – and in Honor and Richard Thornleigh and their seafaring son, Adam, the young princess has loyal allies.

When Mary releases her from the Tower, hoping she’ll make a false move and condemn herself, the Thornleighs return from exile to help Elizabeth in the fight of her life. Disgusted by Queen Mary’s proclaimed intent to burn heretics, Honor visits Elizabeth and they quickly become friends. And when Adam foils a would-be assassin, Elizabeth’s gratitude swells into a powerful – and mutual – attraction. But Honor is playing a dangerous game as a double agent, aware that a false move of her own could uncover her past as a condemned heretic. To save her family and Elizabeth, Honor must turn a headstrong princess into a queen before “Bloody Mary” destroys them all. 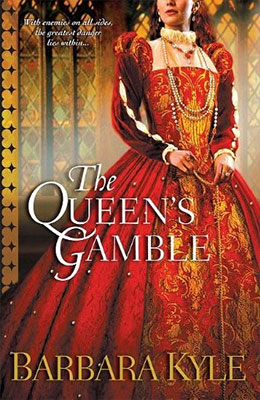 “Action-packed adventure that expertly blends fiction with history … a pulsating story of valor and greed, love and passion, and the tremendous cost of loyalty.” – Publishers Weekly blog

Young Queen Elizabeth I’s path to the throne has been a perilous one, and already she faces a dangerous crisis. French troops have landed in Scotland to quell a rebel Protestant army, and Elizabeth fears once they are entrenched on the border, they will invade England.Isabel Thornleigh has returned to London from the New World with her Spanish husband, Carlos Valverde, and their young son. Ever the queen’s loyal servant, Isabel is recruited to smuggle money to the Scottish rebels. Yet Elizabeth’s trust only goes so far—Isabel’s son will be the queen’s pampered hostage until she completes her mission. Matters grow worse when Isabel’s husband is engaged as military adviser to the French, putting the couple on opposite sides in a deadly cold war. 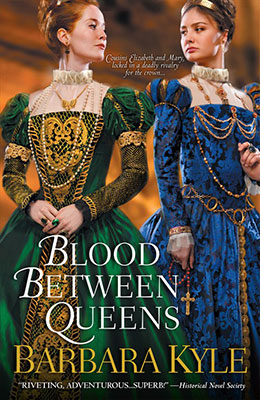 Following her perilous fall from a throne she’d scarcely owned to begin with, Mary Queen of Scots has fled to England, hoping her cousin, Queen Elizabeth, will grant her asylum. But now Mary has her sights on the English crown, and Elizabeth enlists her most trusted subjects to protect it. Justine Thornleigh is delighting in the thrill of Queen Elizabeth’s visit to her family’s estate when the festivities are cut short by Mary’s arrival. To Justine’s surprise, the Thornleighs appoint her to serve as a spy in Mary’s court. But bearing the guise of a lady-in-waiting is not Justine’s only secret. The weight of her task is doubled by fears of revealing to her fiancé that she is in truth the daughter of his family’s greatest enemy. Duty-bound, Justine must sacrifice love as she navigates a deadly labyrinth of betrayal that could lead to the end of Elizabeth’s fledgling reign. 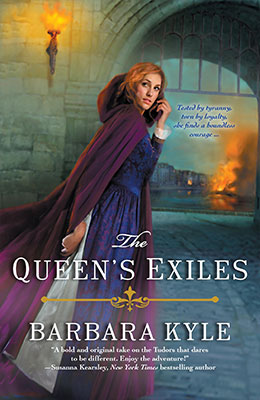 “A heart-stopping thriller… Kyle is a master at her craft.” – RT Book Reviews

“An epic tale of patriotism and treason, political upheaval and oppression, familial love and the ties that bind” – Let Them Read Books blog

1572. Europe is in turmoil. A vengeful faction of exiled English Catholics is scattered about the Continent, plotting to overthrow Queen Elizabeth and install her cousin Mary, Queen of Scots, on the throne. And in the Netherlands the streets are red with the blood of those who dare to oppose the brutal Spanish occupation. But amid the unrest, one resourceful young woman has made a lucrative enterprise…

Scottish-born Fenella Doorn salvages crippled vessels. It is on one of these ships that she meets wealthy Baron Adam Thornleigh. Secretly drawn to him, Fenella can’t refuse when Adam enlists her to join him in war-torn Brussels to help find his traitorous wife, Frances—and the children she’s taken from him.

But Adam and Fenella will put their lives in peril as they attempt to rescue his young ones, defend the Crown, and restore the peace that few can remember. 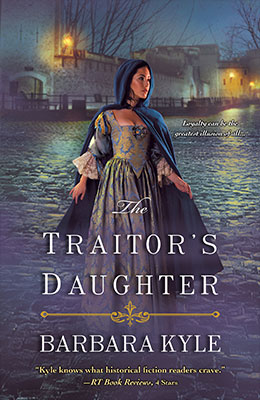 In 1582, England is gripped by the fear of traitors. Kate Lyon, tainted by her exiled mother’s past treason, has been disowned by her father, Baron Thornleigh. But in truth, Kate and her husband Owen are only posing as Catholic sympathizers to gain information for Queen Elizabeth’s spymaster. Kate is an expert decoder. The deception pains her, but she takes heart in the return to England of her long estranged brother Robert. If only she could be sure where his loyalties lie…

Kate and Owen’s spying yields valuable intelligence: English Catholics abroad are spearheading an invasion that would see Elizabeth deposed—or worse—in favor of Mary, Queen of Scots. Kate takes on the dangerous role of double agent, decoding and delivering letters the exiles send Mary. But when lives and fortunes hang by the thinnest threads, betrayal is only a whisper away…

A brilliant blend of Tudor history and lush storytelling, The Traitor’s Daughter is a riveting, passionate novel of loyalty, heartbreak, and one woman’s undaunted courage. 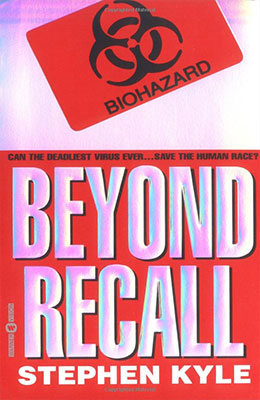 Artemis is Goddess of the Hunt, Protector of Children … and a hideous disease that suddenly strikes three continents, causing fever, convulsions, unstoppable bleeding, and 100 percent fatality in hours. A jungle nightmare like Marburg or Ebola, except for two things: Artemis isn’t natural, it’s an ungodly bioweapon aimed at America. And it kills only women.

But Artemis was created by a woman, Nobel Prizewinning Dr. Rachel Lesage, for the one reason that the U.S. government can’t understand. To save humanity.

Because another global catastrophe is looming, one the superpowers have ignored. Now, with implacable logic, Rachel Lesage is about to stop Armageddon–by unleashing the Apocalypse. 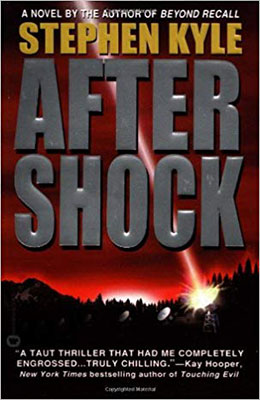 “A wild, thrilling ride through cutting edge technology, love and betrayal, and the ultimate triumph of the human spirit.”– T.J. MacGregor, author of “The Other Extreme”

In Alaska, physicist Mike Ryder discovers that his experimental communications system, HARC, has been commandeered by military personnel who wish to turn it into a weapon. Mike’s old flame, Dana, a Native American activist, helps him to regain control of HARC before disaster strikes. 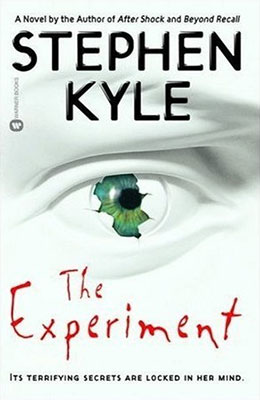 A concentration camp, a doctor’s cruel face, and death … Movie stuntwoman Alana Marks never experienced any of the hell that happened decades ago, but somehow she has horrifying memories of it all.

Giving birth in wartime to a daughter she never knew, Alana’s gypsy mother was forced to serve as a test subject for genetic research. Since then, its survivors and their children have been hunted down and murdered, one by one.

Now it’s Alana’s turn to die. As a killer emerges from the shadows, she and the boy she must protect have only one chance: to use her gypsy heritage and her allies within that fierce-hearted community. Yet even if she survives, she must still confront the terrible legacy of … The Experiment 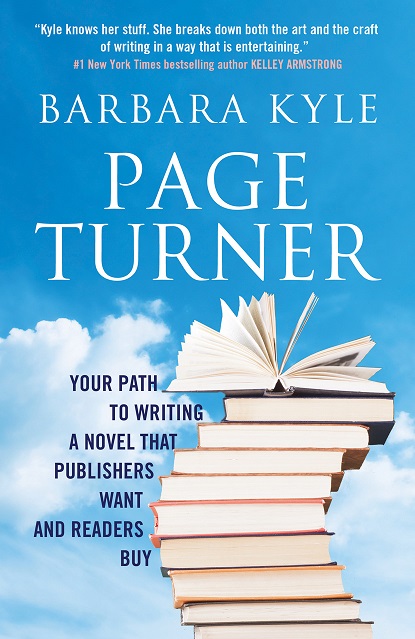 “Kyle knows her stuff. She breaks down both the art and the craft of writing in a way that is entertaining and easy to understand.”— #1 New York Times bestselling author Kelley Armstrong

What makes a page-turner? What mysterious literary essence holds a reader so hard they feel they must keep reading? And then tell friends, “I couldn’t put it down!” And what do literary agents and publishers really look for in a manuscript?

Internationally-acclaimed author and story coach Barbara Kyle reveals the answers in Page-Turner with insights into the essentials of story structure, the power of “deep character,” the art of crafting dialogue, mastering point of view, and more . . . plus practical advice on how to query agents and get published.

Page-Turner shows how to create the kind of novel that brings offers from publishers and praise from readers. For emerging writers who want to break in, and published authors who want to produce a breakout book, Page-Turner is an indispensable guide.

PageTurner is available in paperback, e-book, and audiobook